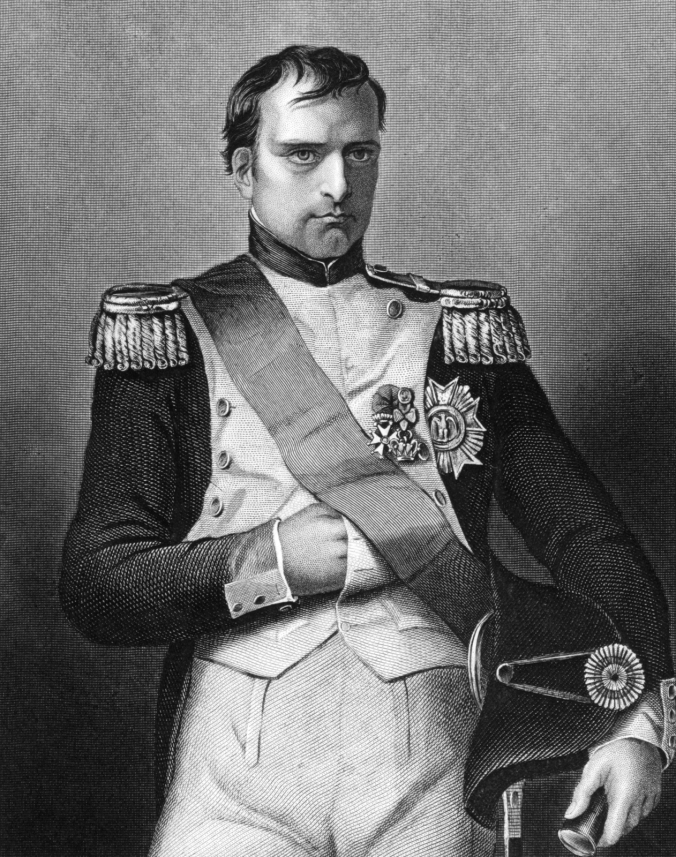 Last week we looked at the little-discussed fact that Christopher Columbus was a successful navigator as much of foreign languages as of the uncharted expanses of the Atlantic. Today we’re going to take a look at a man who tackled the difficulties of a second language on his way to commanding one of the most important nations in the world and conquering half of Europe.

To his fellow Corsicans, Napoleon Bonaparte would have been known as Napolione Buonaparte. Though the name would later be francized, its “foreign” origin could never be completely concealed. When Napoleon was born on the island in 1769, it had been under French dominion for only a few short months. In the Treaty of Versailles of 1768, the Republic of Genoa had ceded the rights to the island to the Kingdom of France, but it was only in May of the following year that the French made good on their newly acquired rights by forcibly taking control of the island. This put an end to the Repubblica Corsa which since 1755 had been acting as a sovereign nation in defiance of its Genoese lords. This short-lived democracy was perhaps the first state formed under Enlightenment principles, emanating a modern constitution decades before the American and French revolutions. The language of this constitution? Italian.

Italian was considered the language of culture by Corsicans, and in fact the language that they spoke at that time and to a lesser extent still speak today is a dialect of Italian closely related to the Tuscan dialect. The Buonaparte family descended from Tuscan nobility, and like most other educated Corsicans Napoleon spoke both Corsican and Italian, the latter of which continued to be the official language of the island until it was banned in 1869 by none other than his nephew Napoleon III.

The fact that it was the son of a Corsican (just like his brother, the father of Napoleon’s heir was born in the Corsican capital of Ajaccio) to ban the use of Italian on the island demonstrates the complexity of the relationship which Corsicans had with language and the role it played in their position as French subjects. We know that Napoleon himself spoke with a heavy Corsican accent and had difficulties writing in French, and thus, Emperor or not, was probably perpetually considered a “foreigner.”

The French emperor was a foreigner in his own land as well; although during the French Revolution he had returned to his island home to combat alongside the Corsican nationalists (who were fighting neither for the French monarchy nor for the democracy which was to replace it, but rather for their own sovereignty), his return to the French Army later pitted him directly against another Corsican revolt. Nor was any love lost for Napoleon on foreign shores; English propaganda depicted the Emperor as being unusually short despite the fact that he stood at 5’6″, slightly taller than the average French man at the time, who came in at just under 5’5″. This propaganda has been effective over time; we still attribute the unusually aggressive behavior of men and women of short stature to the so-called Napoleonic complex.

No matter how tall he may have been, Napoleon was certainly graced with a strong, belligerent character which carried him far beyond the coasts of his remote island home. Along with any small-town complacency which he may have had growing up, Napoleon left both the Corsican and Italian languages behind in his quest for power. It is highly probable that he vigorously pursued fluency in the French language in the same way as he did all of his political and military goals, and even if he did speak with a thick accent it would be hard to argue that he didn’t achieve the basic goal of effective communication in his acquired language.

All across the nation, Americans observed Columbus Day – some with a patriotic commemoration of the audacious roots of our nation, others with biting criticism of the damage wrought in the new world by the advent of European colonialism, and some others without much thought at all of the historical implications of a day off of work or school. And, of course, a sizeable part of the nation is taking the chance to party. Columbus Day parades in places such as New York and San Francisco hearken back to the 1860’s, when the holiday celebrated on the second Monday of October was first appropriated by the nation’s numerous Italian-American community as a day to celebrate their heritage.

The reason is quite simple – despite having sailed the Niña, the Pinta, and the Santa María under the Spanish flag, Christopher Columbus was born and raised in the Republic of Genoa, reminding us that although the various Italian republics, duchies and kingdoms of the time had no official part in European exploration and colonization of the New World, they left their mark on a very personal level. Together with fellow explorers Amerigo Vespucci and Giovanni da Verrazzano, Columbus is part of an important group of Italians who rendered their services to European powers other than those they were born to and are now an integral part of American history and toponymy. Just think of Columbus, Ohio and the homonymous capital of South Carolina, the Verrazzano-Narrows Bridge between Staten Island and Brooklyn along with its less famous cousins in Rhode Island (the Jamestown Verrazzano Bridge) and Maryland (the Verrazzano Bridge), and the very name of our continent.

And yet the simple fact that not one of these explorers sailed under an Italian flag indicates that in order to successfully carry out their mission they surely had to learn to communicate with their crew in a foreign language and, perhaps more importantly, with their royal sponsors.

The mulitilingualism of Columbus in particular is very neatly evidenced by the number of names he used. Probably known at birth by the Ligurian name Christoffa Corombo, he would have been Cristoforo Colombo in the rest of Italy and, although he often used the Latinized Christophorus Columbus abroad, he also went by Cristóvão Colombo and ultimatetely Cristóbal Colón. After much travelling around the well-beaten routes of his native Mediterranean and some trips to the British Isles and perhaps as far away as Iceland, the explorer settled in one of the nations most interested in pushing the boundaries of the known world. It was here in Portugal that he met his wife, had a son, and matured his desire to discover what lay beyond the mighty ocean pounding the tiny nation’s coast. During his time in Lisbon, he tried to convince King John II to fund a westward voyage. Met with no success, he pled his case back in Genova and in the rival maritime republic of Venice and even dispatched his brother to King Henry VII of England to seek support. Finally, he realized that the Catholic Monarchs of Spain were his best shot.

The success of Columbus’ engagement with the monarchs – and in particular with Queen Isabella – is historic, but the correspondence from this era gives us ample evidence that he had the typical difficulties of a foreigner in writing the Castilian language. We know that his spoken Spanish wasn’t perfect either. Bartolomé de las Casas, a Dominican friar who most famously authored A Short Account of the Destruction of the Indies and Historia de Las Indias, chronicled some aspects of Columbus’ journeys based on testimony of his father Pedro, who had accompanied him on his second trip in 1493. Las Casas wrote that Columbus was quite obviously “son of another language, as he knows perfectly neither the meaning of words of the Castilian language nor the way to speak it.” However, while Columbus may not have spoken perfect Spanish, he was clearly an effective enough communicator to convince the Spanish monarchs of the validity of his cause – certainly no small feat.

Columbus Day is a holiday that stimulates various reactions. It can be seen as a celebration of the “discovery” of the New World or as an occasion to reflect on the injustices that made up a large part of the colonial practices resulting from the discovery. It can also be seen as a time to remember the contribution of the Italian-American community to the nation’s growth. Perhaps we can remember the tenacity of the Genoese sailor who managed to win support for and carry out a seemingly impossible mission – all in a foreign language.

In 2002 the National Security Education Program, a division of the U.S. Department of Defense which collaborates with educational institutions, launched a pilot version of the Language Flagship as part of an effort to enhance language skills in “critical need” languages identified by the U.S. State Department as Arabic, Azerbaijani, Bangla/Bengali, Chinese (Mandarin), Hindi, Indonesian, Japanese, Korean, Persian, Punjabi, Russian, Turkish, and Urdu. The Language Flagship is a challenge to U.S. universities to endow students with professional proficiencies in these languages; generous funding and additional resources at the K-12 level are part of the program.

Arabic is at the top of the list alphabetically but is certainly near the top in importance as well. Interactions with the Arab world are important commercially, politically, and militarily, and this importance will only continue to grow. The United States needs professional capabilities in Arabic in many sectors, and it seems only natural that it should try to develop these capabilities in the Arab capital of America.

The University of Michigan and Michigan State University have both received funding for their Arabic programs; in addition State has launched a partnership with the Dearborn Public School District to “develop a national K-12 model for Arabic foreign language instruction that flows smoothly across all grades and builds on previous learning.” Starting in Kindergarten, children in the school district will be taught Arabic by highly qualified teachers.

Many children are already native Arabic speakers- the approximately 32,000 Arab Muslims in Dearborn are nearly one-third of the city’s population and in some public schools the Arab population is as high as 90 percent. Given quality instruction all the way through the 12th grade, students will graduate with a respectable knowledge of Arabic. They will then be eligible for one of forty university scholarships to continue their studies of the language at a higher level.

The push for Arabic language instruction by the federal government is in direct contradiction with some currents of popular sentiment in Dearborn. A 2009 report by the Wayne County Regional Education Service Agency recommended that Fordson High School prohibit all non-English use except in circumstances where it was absolutely necessary-“To do otherwise reinforces a perception by some that Fordson is an Arab School in America rather than an American school with Arab students.” In 2010 the United States Department of Education had to step in to ensure that the Dearborn Public School District would fulfill their obligation to provide limited English proficient (LEP) parents with information about the children’s education in Arabic. The Department’s Office for Civil Rights also found that the school district was denying English language learner (EL) students access to “non-academic and extracurricular programs, services and activities such as guidance and counseling” on the basis of their national origin.

The complete integration of Arabs into the community in Dearborn and the greater Detroit area while encouraging them to preserve their language is no simple task. However it is clear that as the world economy undergoes massive changes, Detroit will no longer be able to survive on its faded industrial glory. It can transform itself for the future by taking advantage of another part of the heritage left behind by Henry Ford- the country’s largest Arab-American population.