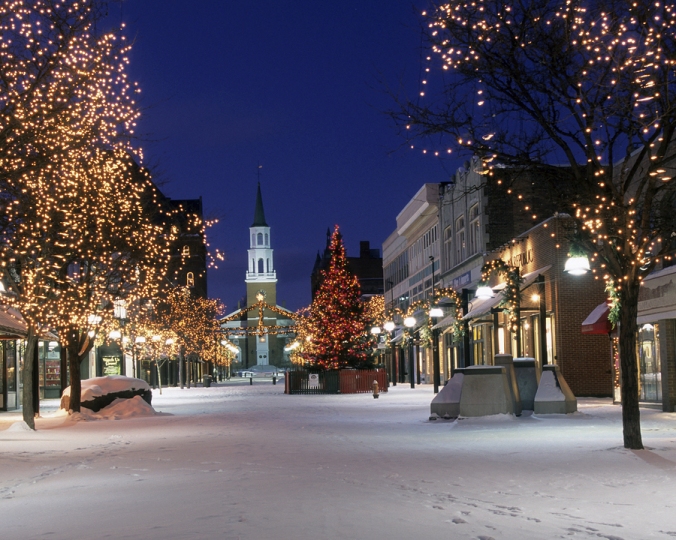 Last week’s blog was inspired by an enlightening encounter during a trip to Burlington, Vermont, on the shores of Lake Champlain. This wasn’t the first time that Burlington has provided the backdrop for the scenarios presented on our blog – we’ve written about the lively Bosnian community in the city and its environs as well as the bilingual French heritage of the Green Mountain State.

The French-speaking ancestors of many Northern Vermonters immigrated to the area at a time when Quebec was a poor province and the factories of New England offered the prospect of steady work. The tables have slowly turned and Vermonters are now used to seeing Québécois as relatively wealthy tourists on par with the New Yorkers and Bostonians who seem to have been vacationing in the region since the Republic of Vermont became the 14th of the United States.

I was particularly struck by this change as I strolled down Burlington’s charming downtown marketplace, Church Street. Many of the restaurants, cafés and boutiques lining the pedestrian street make it clear that they happily welcome the new foreign clientele with a little blue sticker which reads “Bienvenue Québécois.”

The simple blue stickers are a small change to Church Street’s quaint aesthetic, but they represent a big change to its mentality. Issued in 2011, the Bienvenue stickers were joined in 2013 by over 700 bilingual signs on parking meters, courtesy of the Alliance Française of the Lake Champlain Region, adding to a concerted effort to capitalize on Vermont’s proximity to Canada’s French-speaking province. After all, tourists come from New York and Boston, which are 300 and 215 miles away, respectively; why shouldn’t they come from Montreal, which is at a relatively short distance of 95 miles?

The fact the signs are written directly in French means that store and restaurant personnel on Church Street are ready to welcome not only the Northern tourists, but their language as well. In order to help the downtown merchants with this task, the Alliance Francaise offers them affordable French language courses under the auspices of a program called “Bilingual Burlington.”

Curious to know how much salespeople and waiters actually use French with customers, I stopped in to Jess Boutique to ask a few questions. General Manager Erin Brennan explains:

“I believe I am the only one who speaks any French in the store right now. I took about 6 years of French in high school and at Concordia University when I was living in Montreal. My conversational skills are basic, but I have used them some with customers in the store. I find it’s mostly helpful in understanding what people are saying and less helpful when I am trying to converse. I tend to get a bit nervous and forget my vocab and verb conjugation skills! Most Quebecois tourists speak both English and French, or have someone with them who does.”

As a foreign language teacher, I know that when someone has studied a language for several years but gets nervous when she has to speak, what she needs is a little practice! After my quick visit to Burlington, it seems to me that Erin is in a great position to get just that – Church Street has opened its arms to its northern neighbors and has created an environment where their language is well-received. I heard echoes of French all around town, and over time I wouldn’t be surprised to see Church Street merchants acquire more confidence in their language skills. I’m looking forward to hearing a few more bienvenue‘s the next time I come to visit!

In 2002 the National Security Education Program, a division of the U.S. Department of Defense which collaborates with educational institutions, launched a pilot version of the Language Flagship as part of an effort to enhance language skills in “critical need” languages identified by the U.S. State Department as Arabic, Azerbaijani, Bangla/Bengali, Chinese (Mandarin), Hindi, Indonesian, Japanese, Korean, Persian, Punjabi, Russian, Turkish, and Urdu. The Language Flagship is a challenge to U.S. universities to endow students with professional proficiencies in these languages; generous funding and additional resources at the K-12 level are part of the program.

Arabic is at the top of the list alphabetically but is certainly near the top in importance as well. Interactions with the Arab world are important commercially, politically, and militarily, and this importance will only continue to grow. The United States needs professional capabilities in Arabic in many sectors, and it seems only natural that it should try to develop these capabilities in the Arab capital of America.

The University of Michigan and Michigan State University have both received funding for their Arabic programs; in addition State has launched a partnership with the Dearborn Public School District to “develop a national K-12 model for Arabic foreign language instruction that flows smoothly across all grades and builds on previous learning.” Starting in Kindergarten, children in the school district will be taught Arabic by highly qualified teachers.

Many children are already native Arabic speakers- the approximately 32,000 Arab Muslims in Dearborn are nearly one-third of the city’s population and in some public schools the Arab population is as high as 90 percent. Given quality instruction all the way through the 12th grade, students will graduate with a respectable knowledge of Arabic. They will then be eligible for one of forty university scholarships to continue their studies of the language at a higher level.

The push for Arabic language instruction by the federal government is in direct contradiction with some currents of popular sentiment in Dearborn. A 2009 report by the Wayne County Regional Education Service Agency recommended that Fordson High School prohibit all non-English use except in circumstances where it was absolutely necessary-“To do otherwise reinforces a perception by some that Fordson is an Arab School in America rather than an American school with Arab students.” In 2010 the United States Department of Education had to step in to ensure that the Dearborn Public School District would fulfill their obligation to provide limited English proficient (LEP) parents with information about the children’s education in Arabic. The Department’s Office for Civil Rights also found that the school district was denying English language learner (EL) students access to “non-academic and extracurricular programs, services and activities such as guidance and counseling” on the basis of their national origin.

The complete integration of Arabs into the community in Dearborn and the greater Detroit area while encouraging them to preserve their language is no simple task. However it is clear that as the world economy undergoes massive changes, Detroit will no longer be able to survive on its faded industrial glory. It can transform itself for the future by taking advantage of another part of the heritage left behind by Henry Ford- the country’s largest Arab-American population.

On the streets of Dearborn, Michigan, just outside of Detroit, you can count on hearing the Arabic language at least five times a day. From its telltale location on Ford Street, the Islamic Center of America broadcasts its calls to prayer from a loudspeaker, calling out to the city’s Lebanese, Yemeni, and Iraqi residents in the language which unites them.

The Islamic Center of America- the largest mosque in America- and the Arab-American Museum are testimony to what any visitor to Dearborn would probably quickly gather by way of the Arabic signs throughout the city- Dearborn is the heart of Arab-America.

Part of the mission of the brand-new museum- the first of its kind- is to educate people about the role that Arab-Americans have had in our country since its founding. Most people are not aware that it was Henry Ford to first call the Arabs to Michigan. According to the Ford Motor Company, “Upon landing in America, many immigrants were not headed for Detroit, but changed their paths when they heard about Ford Motor Company’s wage of $5 for a day’s work.” Many of the immigrants who came first to Highland Park- the site of Ford’s first factory and the birthplace of the Model T- and then to Dearborn’s South End to work at the Ford Rouge plant- which with its 90,000 employees would soon become the world’s largest industrial complex- came from Lebanon, Syria and Yemen.

The beginning of the 20th century saw the rise of many Lebanese Maronite Christian churches in the area as well as what were perhaps the first Muslim Mosque and Chaldean Catholic Church in the United States- the former in Highland Park in 1921 and the latter in Detroit in 1947.

Arab Christians far outnumbered the Muslims among the early immigrants and aside from professing different faiths, the immigrants from the large area generally known as the “Middle East” had linguistic differences as well. The Levantine dialects of Arabic spoken in Lebanon and Syria are quite different from Yemeni Arabic even though many of the immigrants would have also spoken the Modern Standard Arabic which linguistically unites the Arabic world. The language of the Chaldeans, on the other hand, Christians from modern-day Iraq, is an eastern dialect of Aramaic, the “language of Christ,” although many- especially modern-day refugees of the Gulf and Iraq Wars- have learned Arabic at school.

The Chaldeans, not a well-known population anywhere in the world, are an important part of the Detroit Metropolitan Area, which is now home to “the largest single concentration of Chaldeans, Assyrians, and Syriacs in the Western Hemisphere,” estimated to be from 100,000 to 120,000 strong. Chaldeans are Detroit’s merchants- they own 75 of the city’s 84 supermarkets.

Interest in the Chaldeans’ ancient language- a form of which many Americans may have heard in Mel Gibson’sThe Passion of the Christ– is palpable in the Detroit area. Mother of God Chaldean Catholic Church offers Chaldean language courses from the basic (101) to the advanced fluent (501) level- free while the University of Detroit- Mercy offers courses in Aramaic open to any and all college students. Chaldean.org evens offers tips on how to teach the language to the family pet.

The Chaldean language is an important part of world history and a source of pride for the Motor City. Oppressed for millennia in the Middle East, the Chaldean community has flourished in Detroit. Practicing a Christian faith has made their integration into the city’s fabric much more seamless than that of their Muslim brethren, who are nonetheless a crucial part of Michigan’s present, and future.