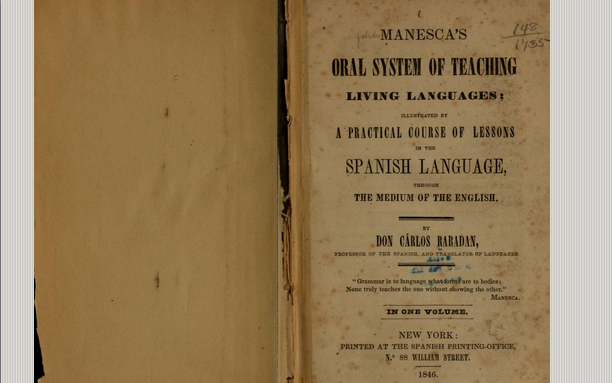 The foreign language teachers to whom Jean Manesca addressed his seminal “Oral System of Teaching Living Languages Illustrated by a Practical Course of Lessons in the French through the Medium of the English” immediately took notice of the manual and its innovative method; some of those who read the book even took up the author’s challenge to transfer his method – constructed on teaching the French language to speakers of English – to the teaching of other languages.

One of the first direct children of Manesca’s method was Spanish teacher Don Cárlos Rabadan’s “Manesca’s Oral System of Teaching Living Languages; Illustrated by a Practical Course of Lessons in the Spanish Language, Through the Medium of the English” (free e-book).

Rabadan must have been one of the very first teachers to employ Manesca’s method, as at the time that his book was registered in the Library of Congress – 1846 – he writes that he had already been using the method in his own lessons for 16 years. He is a satisfied customer, asserting that “under its guidance, success has never failed to crown my expectations.” He is not alone in this evaluation, as “many meritorious teachers, and other men of learning, acquainted with Manesca’s system, recommend it, not only as the best ever discovered, but also as the only true and safe mode which a teacher can make use of to impart to his scholars a complete knowledge of any foreign language.”

Obviously Rabadan used a modified form of Manesca’s system – that is, he transferred the French teacher’s pedagogical philosophy to the teaching of his own native language, Spanish. His manual is every bit as hefty as the 500-plus page original – Rabadan churns out 1029 pages of lessons and explanations, although his pages are about half the size of Manesca’s. Despite the imposing volume of the work, the author assures readers that “there can hardly be found another language so easily acquired as the Castilian.”

Aside from its facility, Rabadan touts the importance of Spanish for Americans interested in foreign commerce, as well as the “noble, manly, and majestic character” of the language. He is quite adamant in insisting on the masculinity of Spanish, and even takes a cheap shot at one “competitor” tongue’s supposed lack of this characteristic. As he says, “in harmony and softness, [Spanish] rivals the melodious Italian; but it is entirely free from the effeminacy and monotony which so much detract from the beauty of the latter.”

However, Rabadan’s love and knowledge of his own native tongue does not get in the way of his love and respect for foreign languages in general. He attributes great importance to the study of foreign languages and literature, which as he says, “contributes, in no small degree, to the happiness of the human family. By means of it, many old prejudices are dispelled, and replaced by strong affections, thus exerting a salutary tendency to unite mankind, to discourage war among nations, and consequently to promote commerce, which, being the main spring of our social machine, sets, and keeps in constant motion all the mechanism of which it is composed.”

In this one Spanish teacher’s mind, therefore, the study of foreign languages can be an engine for world peace. But although the acquisition of a foreign tongue is a noble pursuit, it is also an extremely delightful one: “For if pleasure alone be our object, without regard to its great utility, what can be more gratifying than to be able to converse fluently with men of different countries?”

That’s an assessment that it’s hard to disagree with.